The Sixth Floor Museum chronicles the assassination of President John F. Kennedy on November 22, 1963, through exhibits and programming presented within the former Texas School Book Depository building. The main exhibit, JFK and the Memory of a Nation, is on the 6th floor. Temporary exhibits and public programs are presented on the 7th floor. While visiting, stop by the Museum Stores + Café.

After you purchase your tickets there is an elevator that takes you up to the sixth floor and drops you off at the start of the exhibit. From there you twist and turn through a maze of information that covers everything from JFK’s life before being elected, his presidency, his death, the investigation and even some of the conspiracy theories.

There is a personal audio tour that is part of the admission fee. I call it a personal audio tour because it is a little remote that you wear around your neck which has a set of headphones plugged into it. As you move along through the exhibit each section is numbered, so once you’ve completed a section you can move on to the next or replay a previous section. The audio is helpful because it will explain the significance of so many of the different films, photographs and artifacts.

In the southeast corner of the sixth floor there is a section closed off with plexiglass walls. Inside this section is where they found the shell casings which they believe were used to kill President Kennedy. Inside the plexiglass walls they have kept all of the original flooring, walls and windows and set it up to look just as it did the day President Kennedy was killed.

The Sixth Floor Museum is located on the sixth and seventh floors of an early 20th-century warehouse at Dealey Plaza in 1963, which is one of Dallas’ best museums and most popular attractions. Since its opening day on Presidents Day 1989, the Museum has welcomed more than 6 million tourists from around the world. People of all ages come here to seek information and understand about the assassination of President John F. Kennedy and much interesting information that they want.

When we visited the museum the cost was $16 per person, and as I mentioned before that includes the free audio tour. Of course, prices always change, so I would check the site if you plan to visit the museum. They also mention that you should consider purchasing tickets online because the museum can get crowded on weekends and holidays. I definitely agree with this because during our visit the line started outside the door and then wrapped around a couple times once we got inside. I’m pretty sure they can only allow a certain number of people into the exhibit for safety reasons, so that definitely slows down the line.

Exhibits on the Seventh Floor

When we were visiting, there wasn’t really much to see on the seventh floor. One thing that you can do on the seventh floor that you can’t do on the sixth floor is take pictures. Even though there wasn’t a lot to take pictures of, it gave us the ability to look out the window in the southeast corner, just one floor above where the shots were fired. The photo below is taken looking out the window from the seventh floor. If you look in the middle of the street below you can see the white “X” which marks the spot where President Kennedy was fatally shot.

You can stand on the side of the road just as spectators did over 50 years ago and see the white “X” that is now painted in the middle of the road (which I mentioned previously). For us it was all so crazy to stand there and try to understand how something like this could ever happen especially with all of the security.

We ended up walking around Dealey Plaza and even took some pictures of the famous “Grassy Knoll” where many witnesses claim the fatal shot came from. In some videos you can see people running up the grassy knoll to see where and who the gun shots possibly came from.

I’m not really going to cover any of the conspiracy theories, but if you’re interested, go to Google and type in “JFK Conspiracy Theories” and you’ll get more information than you could possibly read or watch. Lynn and I have actually done this quite a few times and even spent a couple months watching movies that we rented through Netflix or found on YouTube.

If you do this, you’ll learn that there are numerous theories out there that include hired hit men from abroad, CIA cover ups, and a far right southern group that plotted to kill JFK. Another theory even believes that Lyndon Johnson (Vice President) knew of the assassination attempt and may have been part of it. 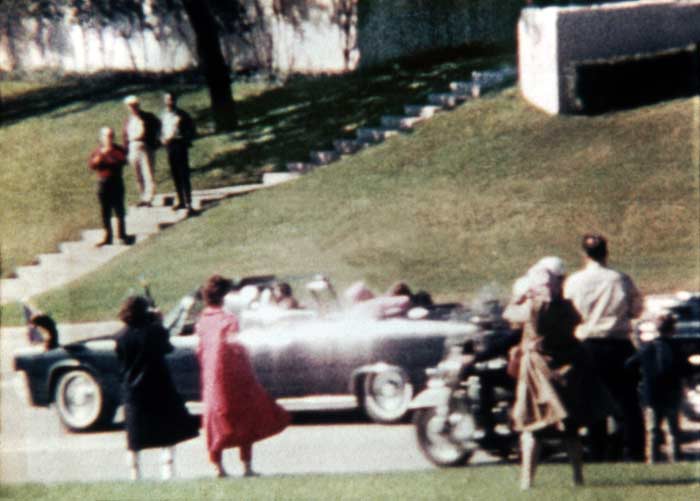 The interesting thing for me is that I never really thought about it before I visited The Sixth Floor Museum. To me it was all fact… Lee Harvey Oswald shot the President and Jack Ruby shot Oswald. That is what I was taught in school so I never thought of it any other way. The museum actually tells it this was as well, and for the most part you’ll believe this same story after walking through the Sixth Floor Exhibit. The museum makes you believe that the report put together by the Warren Commission cleared any doubt as to whether or not Oswald was the only shooter involved in JFK’s assassination. According to the report, Oswald was the only shooter.

I don’t know if I believe any of the conspiracy theories that are out there, but I do believe there are numerous things missing from the investigation. There are a lot of other people that have spent their entire lives researching the JFK assassination, so I’ll let them handle the conspiracy theories. One of them, Robert Groden, still sits in Dealey Plaza nearly every weekend and sells books, DVDs, and CDs based on his theories about the JFK assassination.

The Sixth Floor Museum was so much more interesting than I ever thought it would be. Not only that, it added hours of interesting research and entertainment to our lives well after we visited the museum. I still don’t think that Lynn and I are done researching the topic. It’s something that we both find very interesting and almost can’t believe that it’s still a hot topic among certain groups of people… even 50 years later!

I definitely recommend visiting The Sixth Floor Museum, especially if you’re in the Dallas area. The museum was definitely one of the highlights of our trip to Dallas. If you plan to visit the museum, I would also recommend taking a little extra time to walk around Dealey Plaza and explore the area where one of the most talked about events in United States history took place.